A Close Look at Drivetrain Failure in a Lexus

Though Lexus vehicles are typically known for their reliability and style, a potential issue that many Lexus vehicles face is drivetrain failure. For your convenience, we compiled a list of the most common signs and symptoms of drivetrain failure you should look for if you suspect a problem. Also, we will discuss some underlying causes and what to do when it happens to your Lexus.

There are many different ways that drivetrain failure can present itself. While you will still be able to operate your vehicle while experiencing some of these symptoms, they’re a sign that something is seriously wrong with your vehicle and you should have it inspected by a professional mechanic as soon as possible.

Unfortunately, in most cases, these symptoms will not be enough for you to know for certain what the problem is. Many different car malfunctions can cause similar symptoms. That’s why it’s so important that you get your car checked by a professional as soon as you notice something that seems off. Professionals who know the Lexus brand have the tools necessary to properly inspect and diagnose problems so a plan of action can be discussed with you.

One of the most common causes of drivetrain malfunctions is faulty or loosening U-joints. Short for universal joints, U-joints are small pieces of metal that connect the driveshaft to the differential. In some cases, it connects two drivetrains. They are what allow the drivetrain to move around and do its job.

However, as these little pieces loosen, the tightly-woven web that makes up the inside of your car’s systems starts to fall apart, and the drivetrain can move around more than it should. This leads to the grinding and clunking noises we talked about earlier.

What to Do When Faced with Drivetrain Failure in Your Lexus

The best place to go when you think you might 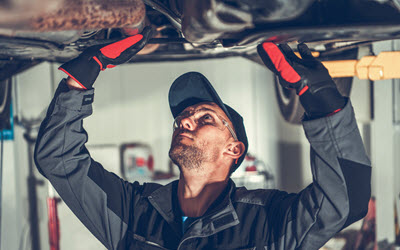 No matter what trouble you’re having with your Lexus, be it drivetrain issues or not, we hope you’ll come to visit us. Contact us today to set up an appointment and to learn more about our services. We look forward to meeting you and becoming your service center for all your car care and maintenance needs.